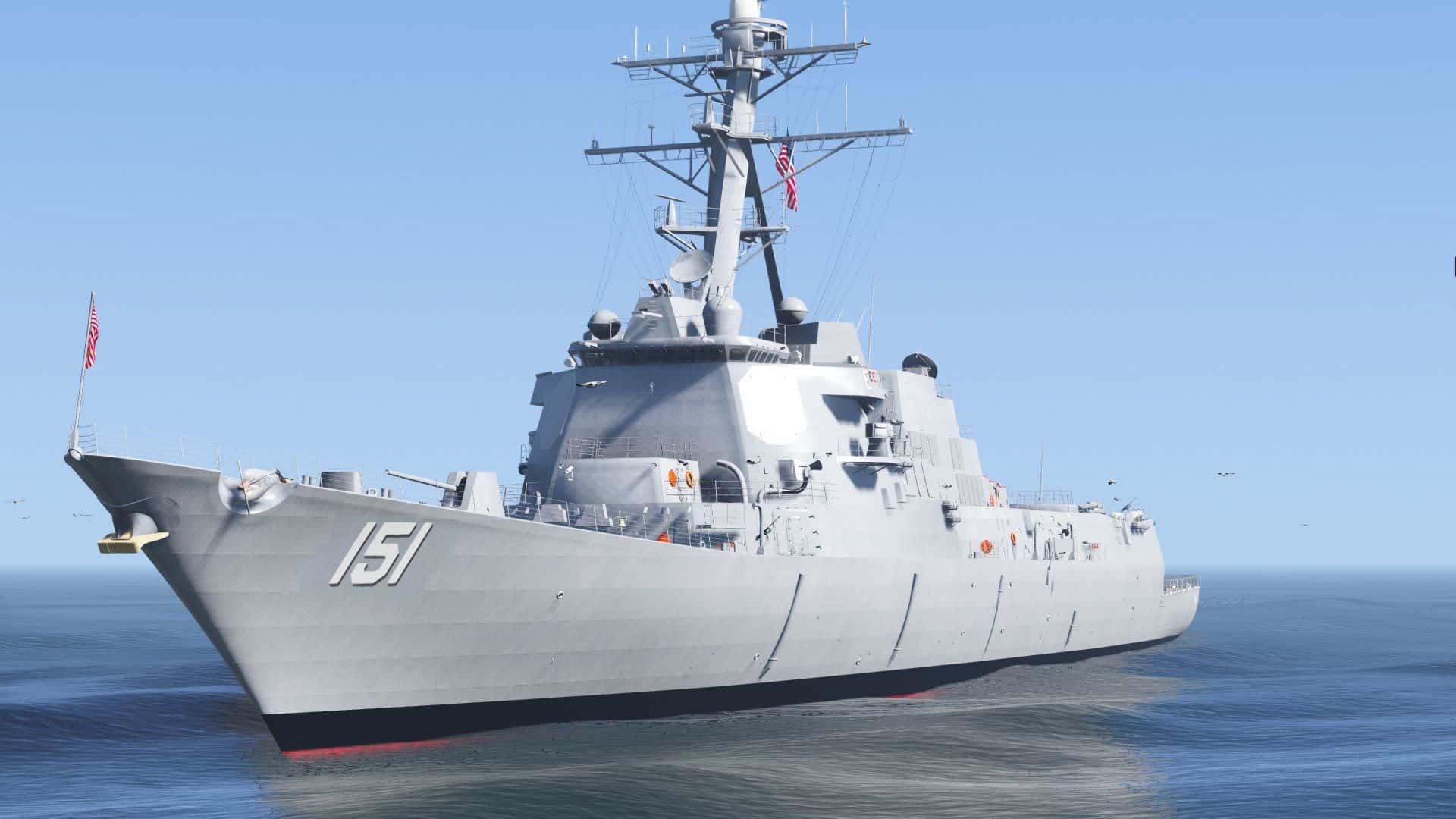 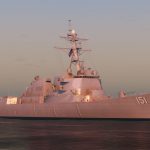 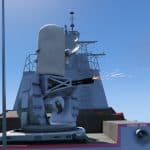 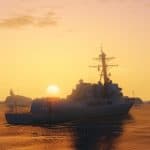 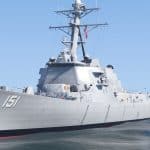 After… 2 years or something here is the first official release of the Arleigh Burke Class destroyer in Flight IIA configuration. This particular ships represents the fictional DDG-151 Nathan James from the novel and TV series “The Last Ship”.
This model features a detailed exterior and features parts of the interior, including hangar bay and bridge. The boat has a custom layout, allowing 10 people to sit “inside”. 8 on the bridge and 2 as flight deck controllers on the rear.
It also uses front bumper tuning to represent different ships from the TV series. DDG-162 Shackleton and DDG-157 Hayward can be represented. The tuning changes hull number, name and ship’s crest.
The hangar bay doors are extra 1 and 2 and can toggled on and off in the vehicle component menu. Model features some lights, but doesn’t look as much as a christmas tree as it did on previous screenshots and videos.
Some radars rotate and the flags are waving in the wind.

NO WORKING WEAPONS. No MG, no missiles, no cannon. Ships can not have weapons natively, converting it into amphibious vehicle class made the handling really… Well, shit.

So here’s the current version for smooth sailing in peacetime waters.

BIG THANKS GO OUT TO EVERYONE INVOLVED

Credits: nathanjamesddg151: Buying different models to put together the Flight IIA destroyer model and a lot of texture work, references and help Elope/Yukikaze: messing with big boat handling lines to have a somewhat realistic handling PNWParksFan: Being by my side again and again when it comes to the troublesome and tedious boat class in GTA V, trying to figure out as much as possible how things work cpast: For making a script which finally enables weapons on ships!

Grand Theft Auto 5 is a great game and mods make it even better. The game is still relevant and one of the best games playable right now due to its unmatched physics and open-world experience. Even though GTA Online is there, most people prefer to enjoy the mysteries and the experience in the singleplayer mode. However, it can also get a bit repetitive. GTA 5 Mods help you overcome the boringness to add more content into the game and customize it according to your will. Grand Theft Auto 5 Mods bring various enjoyable elements into the game like new game modes, vehicles, weapons, and characters. The modding community has made mods diverse and you can choose from thousands of mods to fit into the game. For instance, a GTA 5 DDG-151 Nathan James [Working gun | Add-On | Interior | Custom layout] 1.5 Mod can bring your dream vehicle into the game, letting you enjoy it even more. One by one, you can customize the entire collection of GTA 5 vehicles giving it a more lifelike experience with real cars from real manufacturers. Gun mods can bring you the feel and combat experiences of other games, allowing you to wield a lightsaber from Star Wars, the famous dubstep gun from Saints Row, Thor’s hammer, or even the latest collection of cyber-ware and weapons from the most hyped games. Similarly, one visual enhancing Grand Theft Auto 5 DDG-151 Nathan James [Working gun | Add-On | Interior | Custom layout] 1.5 Mod can bring the missing colors of beautiful sunsets and gloomy evenings the game is missing. You can finally enjoy a true Los Angeles experience thanks to plenty of visual enhancing mods the community has come up with. So when are you going to cruise down the streets of Los Santos enjoying the breathtaking views in the latest Cybertruck?