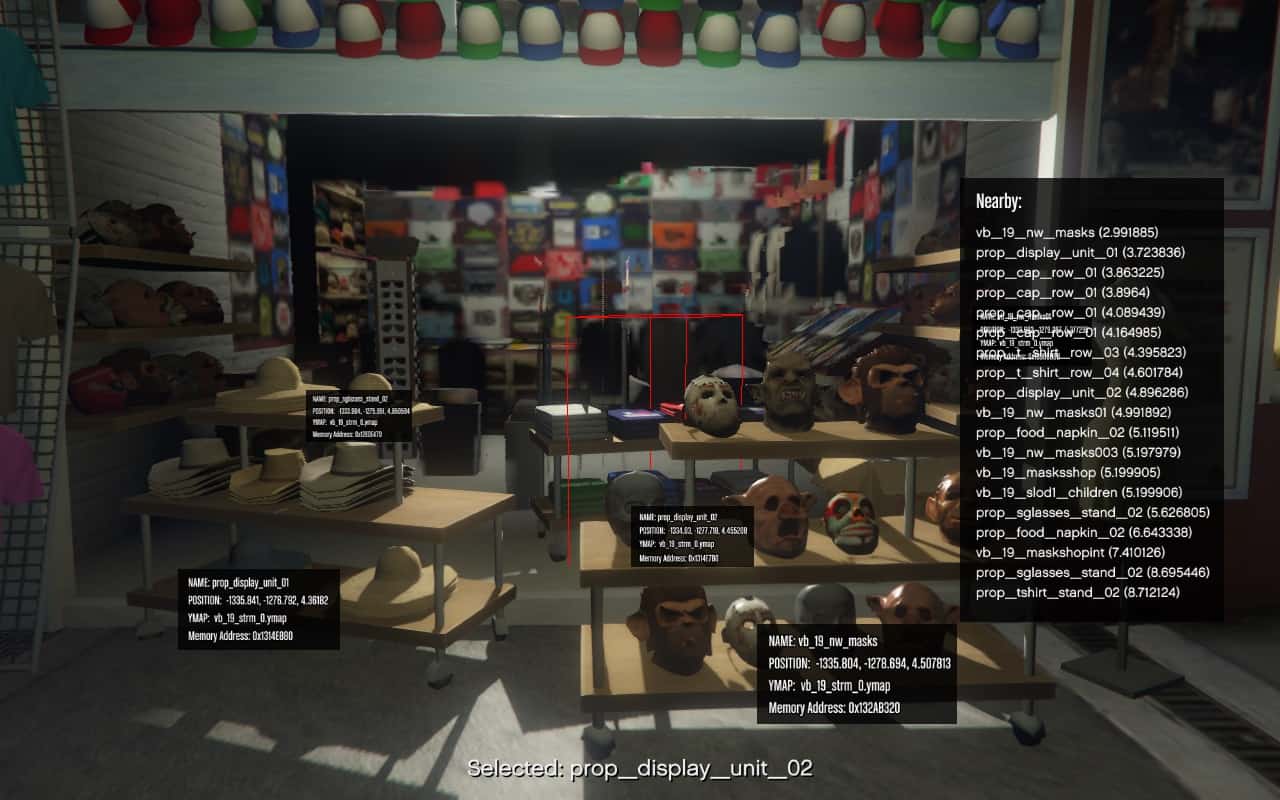 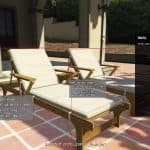 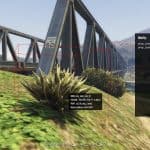 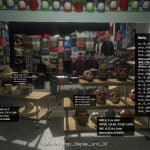 v1.12 (May 11, 2017) –
Camera starts on the player by default (configurable in INI)
Nearby objects can be dumped to file via a command

v1.1 (Feb 15, 2017) –
Added a console interface to make it easier to get detailed information about objects (currently limited to 2 commands! see below)
Added an option to customize the colour of building/ prop overlays
Added an option to choose whether to draw all or only the selected object to the screen
Additional tweaks to camera behavior while in the editor
Peds and vehicles are now disabled while in free camera mode
Changed the the layout of the onscreen object list
Fixed a problem that caused a crash for certain people when reading values in the config file
Fixed a bug that caused the weather and time to be locked while the script was installed
Fixed a bug that caused the screen to constantly fade out when pressing the right mouse button, even while not in free camera mode
Fixed a bug that allowed the player to enter the camera again while it was already active
Improved backwards compatibility with older versions of ScripthookVDotNet
Other internal stability fixes and improvements

For the average user, this is probably of no use or interest to you so keep that in mind before you read any further!!

This is a little tool/ script I made which allows you to get some useful info about static entities (buildings/ props) placed around the map. For any building/ prop that is defined as a static placement, it will show you the model name as well as the name of the base .ymap file where it is defined. Simply move the camera around, and information will be shown over objects as they come in view. You can view even more information about an object by using the built in console interface with the commands listed below.

My hope is that this will ease the process of working with in-game objects via OpenIV, especially for people working hard on map- related mods. Because afaik there is no standard process for finding this kind of information about objects around the world.

There are some options that can be customized in the .ini file including the search radius for objects/ buildings and max amount of objects infos that will be drawn on the screen. These settings could be useful if you are experience performance problems. Naturally there is some hit to performance, due to the sheer amount of objects that exist in the world.

Other info
The type of an object can be determined by the color of the label. For buildings/ static objects, it will be red. For props it is gold. This can be changed in the config file.

As always, let me know of any bugs/ problems, and offer suggestions for how the mod can be improved! Thanks 😀

List of usable commands
“?” or “help” – Gets a list of available commands
“reloadconfig” – Reloads all values from the config file
“showtextures” – Prints all nested texture names for the selected object
“dumpobjects” – Dumps nearby objects to nearbyobjects.txt

Default activation key is ‘Y’, but you are free to change this in the config file

Installation
Create a “scripts” in the main folder where GTA V is installed (if not already there)
Place MapInfoTool.dll in the folder

Mods known to cause conflicts
On- foot Cinematic Camera

Grand Theft Auto 5 is a great game and mods make it even better. The game is still relevant and one of the best games playable right now due to its unmatched physics and open-world experience. Even though GTA Online is there, most people prefer to enjoy the mysteries and the experience in the singleplayer mode. However, it can also get a bit repetitive. GTA 5 Mods help you overcome the boringness to add more content into the game and customize it according to your will. Grand Theft Auto 5 Mods bring various enjoyable elements into the game like new game modes, vehicles, weapons, and characters. The modding community has made mods diverse and you can choose from thousands of mods to fit into the game. For instance, a GTA 5 Map Info Tool 1.14 Mod can bring your dream vehicle into the game, letting you enjoy it even more. One by one, you can customize the entire collection of GTA 5 vehicles giving it a more lifelike experience with real cars from real manufacturers. Gun mods can bring you the feel and combat experiences of other games, allowing you to wield a lightsaber from Star Wars, the famous dubstep gun from Saints Row, Thor’s hammer, or even the latest collection of cyber-ware and weapons from the most hyped games. Similarly, one visual enhancing Grand Theft Auto 5 Map Info Tool 1.14 Mod can bring the missing colors of beautiful sunsets and gloomy evenings the game is missing. You can finally enjoy a true Los Angeles experience thanks to plenty of visual enhancing mods the community has come up with. So when are you going to cruise down the streets of Los Santos enjoying the breathtaking views in the latest Cybertruck?