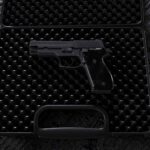 Full credit goes to tigg and 4Echo for the original mod on steam. I simply ported this mod to GTA V. This model is from Insurgency Sandstorm, I take no credit for creating the model or textures.

Description:
The P220 is a late Cold War-era pistol of Swiss origin. It was designed by SIG in the early 1970s for the Swiss military as a less expensive, yet very high-quality alternative to their earlier P210 pistol. Despite being cheaper than the P210, the P220 is still more expensive than the average pistol. The design proved to be a success and over time new models were added to the lineup and older models have been steadily improved. Despite being over 30 years old the P220 series remains among the top-of-the-line pistols.

Replaces the Pistol or Combat Pistol.

Please note:
No issues other than slight misalignment for the reload on the combat pistol.

Installation:
Extract the archive and place the files in
mods/update/x64/dlcpacks/patchday8ng/dlc.rpf/x64/models/cdimages/weapons.rpf

Grand Theft Auto 5 is a great game and mods make it even better. The game is still relevant and one of the best games playable right now due to its unmatched physics and open-world experience. Even though GTA Online is there, most people prefer to enjoy the mysteries and the experience in the singleplayer mode. However, it can also get a bit repetitive. GTA 5 Mods help you overcome the boringness to add more content into the game and customize it according to your will. Grand Theft Auto 5 Mods bring various enjoyable elements into the game like new game modes, vehicles, weapons, and characters. The modding community has made mods diverse and you can choose from thousands of mods to fit into the game. For instance, a GTA 5 SIG Sauer P220 Mod can bring your dream vehicle into the game, letting you enjoy it even more. One by one, you can customize the entire collection of GTA 5 vehicles giving it a more lifelike experience with real cars from real manufacturers. Gun mods can bring you the feel and combat experiences of other games, allowing you to wield a lightsaber from Star Wars, the famous dubstep gun from Saints Row, Thor’s hammer, or even the latest collection of cyber-ware and weapons from the most hyped games. Similarly, one visual enhancing Grand Theft Auto 5 SIG Sauer P220 Mod can bring the missing colors of beautiful sunsets and gloomy evenings the game is missing. You can finally enjoy a true Los Angeles experience thanks to plenty of visual enhancing mods the community has come up with. So when are you going to cruise down the streets of Los Santos enjoying the breathtaking views in the latest Cybertruck?