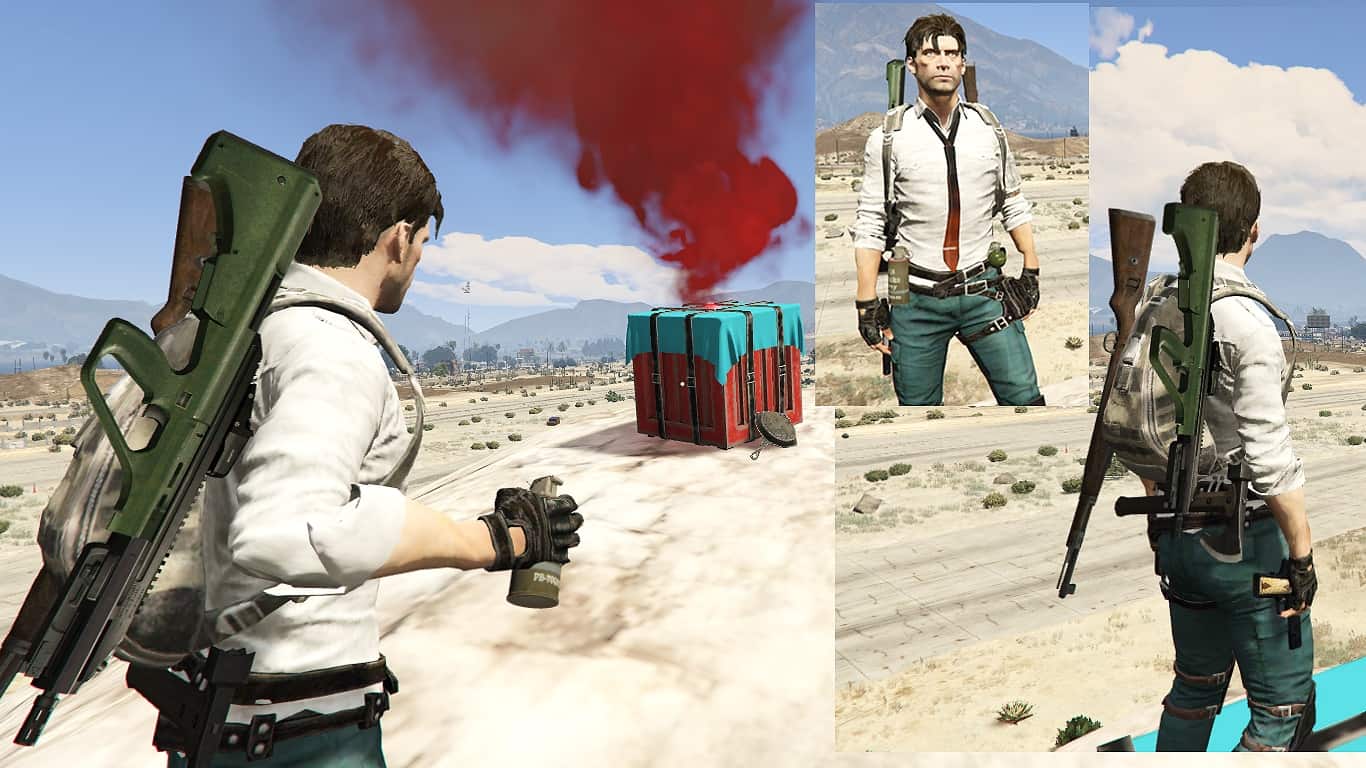 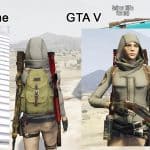 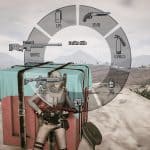 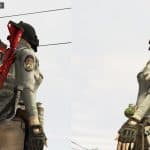 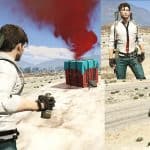 PUBG Identical Customized weapon pickup offset positions for GTA V.
– Carry your weapons Visibly –
when weapons are not in use they will be visibly seen hanging at the parts of ped’s body closely similar with battle royal games like PlayerUnknown Battlegrounds, Fortnite, Rules of Survival, Ghost Recon Wild lands.

-Tip-
If you are new to Pickups then use a trainer to manually equip weapons individually , do not attempt to choose “equip all weapons” in the menu or the weapons will be scattered close to each other in the ground and you’ll get confused

PICKUPS by infamousabre is an outdated script mod , I don’t know why it has to be not updated for a long time but judgingly it is still beautiful for it has the ability to create a fantastic mod like this.

take note that installing pickups will make your numbering for weapons not to function but you can still use the wheels, So use the weapon wheels by holding tab button.

FAQ:
Q. What does this mod do and what is it?
A. It is a custom settings that’s containing configurations made for the PICKUPS script that allows us to see weapons visible in place as battle royale style specifically for PUBG streamed ped. But can still be use with any peds.

Q. Is this containing Skins?
A. No , it is just purely settings

Q. Why is it not working?
A. Make sure you have the latest scripthook that works for you. as every mod running script requires ScripthookVdotnet etc.

Before installing this, be sure to download and install the REQUIRED script first:
Pickups 2.2 by InfamousSabre

3. Melee weapons – Lower part below the bag/backpack
(all the melee weapons , including the Jerry can)

4. Pistol weapons – Right side down below the belt
(all the Hand guns/revolvers including Double barrel Shotgun and Compact grenade launcher)

Grand Theft Auto 5 is a great game and mods make it even better. The game is still relevant and one of the best games playable right now due to its unmatched physics and open-world experience. Even though GTA Online is there, most people prefer to enjoy the mysteries and the experience in the singleplayer mode. However, it can also get a bit repetitive. GTA 5 Mods help you overcome the boringness to add more content into the game and customize it according to your will. Grand Theft Auto 5 Mods bring various enjoyable elements into the game like new game modes, vehicles, weapons, and characters. The modding community has made mods diverse and you can choose from thousands of mods to fit into the game. For instance, a GTA 5 PUBG style weapon pickups 1.2 Mod can bring your dream vehicle into the game, letting you enjoy it even more. One by one, you can customize the entire collection of GTA 5 vehicles giving it a more lifelike experience with real cars from real manufacturers. Gun mods can bring you the feel and combat experiences of other games, allowing you to wield a lightsaber from Star Wars, the famous dubstep gun from Saints Row, Thor’s hammer, or even the latest collection of cyber-ware and weapons from the most hyped games. Similarly, one visual enhancing Grand Theft Auto 5 PUBG style weapon pickups 1.2 Mod can bring the missing colors of beautiful sunsets and gloomy evenings the game is missing. You can finally enjoy a true Los Angeles experience thanks to plenty of visual enhancing mods the community has come up with. So when are you going to cruise down the streets of Los Santos enjoying the breathtaking views in the latest Cybertruck?