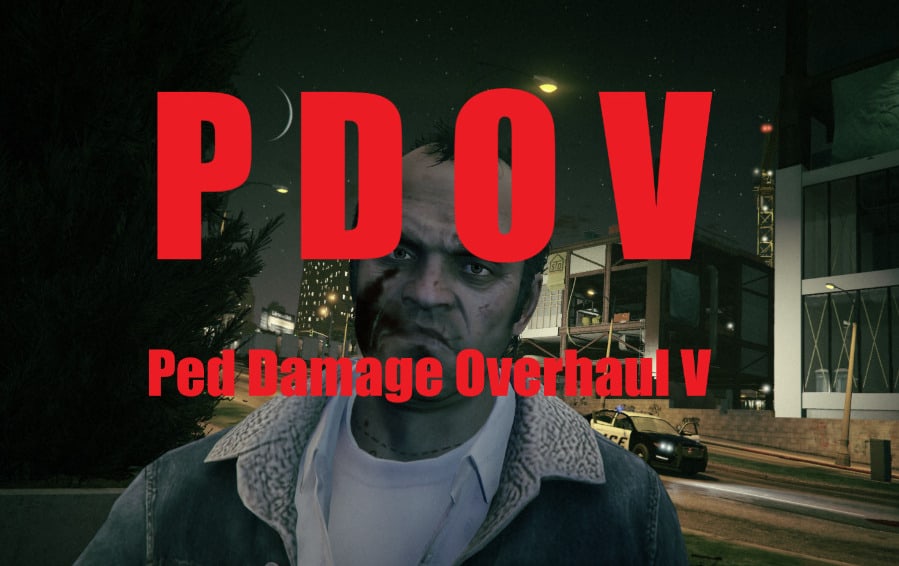 OVERVIEW
This mod tries to make gun fights more diverse, dynamic and interesting and keep them that way throughout the game.
You will find NPCs staggering and stumbling when trying to run with hurt legs, going down without dying within seconds, still audably reacting to player behavior when down, etc.

FEATURES
Here is a quick overview of the most important features:
First off, almost all of the features and their characteristics are based on chance, so the behaviors won’t be the same every time you encounter them – which should ensure more diverse fights and keep things interesting for longer than vanilla does… that was the idea, at least.
Almost every feature can be enabled, disabled or tweaked in the ini (more information further down the page), so this is not only a mod, but also enables you to create your own experience.
The mod is activated by default and the toggle key is F9 (both can be changed in the ini).
This mod only alters behaviors and attributes of human NPCs – animals or anything else remain untouched.

Features:
NPCs go down in 1-5 shots (to the torso) depending on your weapon and their body armour (and are not dead).
NPCs do more damage.
NPCs are less accurate marksmen.
NPC accuracy reduces when their health gets lower.
NPCs take less damage from leg or arm shots.
When their health decreases below a certain threshold, NPCs fall over and don’t get back up. Then they go through three different stages of dying, each with its own randomized “behavior” (movement on the ground). Eventually NPCs will die from blood loss.
There is a bleeding feature, which makes NPCs lose health after they have been fatally injured. It operates based on chance, so NPCs don’t all bleed out in the same amount of time.
All PCs can be disarmed.
NPCs burn alive for a little longer when set on fire.
NPCs have a chance of staying on the ground for a random amount of time when shot (based on their health) – so you can now knock the breath out of your opponents.
NPCs will try to audably react to different situations (they can panic, try to calm you, beg for their lives, etc.).
For all included behaviors the movement and pain sounds have been adjusted (and also randomized) to hopefully make your experience more interesting.

We hope that you will have as much fun with this mod as we have creating and improving it!

While in game, you can press F9 to check if the mod was loaded correctly (F9 once to disable, then F9 again to re-enable the mod).

TWEAKING
There are already a lot of features enabled and tweaked for out-of-the-box use, yet there are some features left untouched which can be enabled in he ini. That said, if you just want to disable one or more features, set their respective values to 0.

If you want to disable a feature which is based on chance, just set the chance value to 0.

There are also many other features that can be activated and tweaked in the ini – here are some examples:
NPCWeaponModifier (and many other damage modifiers) -> makes NPCs do more or less damage, depending on what you set it to
BleedWhenShot -> enables a bleeding feature which triggers when an NPC gets shot (so not the usual “bleed out when under x health” but consistent bleeding which is applied after the first hit of a bullet – the bleeding chance and deducted health points can be set separately).

The ini is full of values for those wanting to experiment a little.

One word of warning to tweakers: If the NPC health is set too high, headshots might not be lethal anymore, unless they hit the actual brain of the NPC (so a shot in the jaw would do more damage than other body parts, but would not be an instant kill). Actual “brain-shots” are
always one-shot-kills, no matter the health.

KNOWN “ISSUES”
(they are not real issues)
The game’s “getting up”-animation is hard to circumvent, so in rare cases you may encounter burning NPCs getting up and falling to the ground again.
While time is altered (e.g. when using the weapon wheel), physics and movement of NPCs in dying states (squirming, rolling on the ground, etc.) can get a little crazy, because the effects of this mod are applied using timers, which tick differently from the game clock. We are already looking for a fix, but haven’t found one that works yet.

Changelog
v1.1
Added experimental vehicle god mode (vehicle can still be damaged a little, for immersion -> turned off by default).
Added new panicking system, which adds a small chance of NPCs surrendering or fleeing if the player is a terminator in combat (can be configured in the ini).
Re-implemented NPC accuracy system (now more complex and also random, can be configured in the ini).
Added parameters to the ini for configuring the audible NPC reactions when they are in dying states.

Grand Theft Auto 5 is a great game and mods make it even better. The game is still relevant and one of the best games playable right now due to its unmatched physics and open-world experience. Even though GTA Online is there, most people prefer to enjoy the mysteries and the experience in the singleplayer mode. However, it can also get a bit repetitive. GTA 5 Mods help you overcome the boringness to add more content into the game and customize it according to your will. Grand Theft Auto 5 Mods bring various enjoyable elements into the game like new game modes, vehicles, weapons, and characters. The modding community has made mods diverse and you can choose from thousands of mods to fit into the game. For instance, a GTA 5 Ped Damage Overhaul V 1.1 Mod can bring your dream vehicle into the game, letting you enjoy it even more. One by one, you can customize the entire collection of GTA 5 vehicles giving it a more lifelike experience with real cars from real manufacturers. Gun mods can bring you the feel and combat experiences of other games, allowing you to wield a lightsaber from Star Wars, the famous dubstep gun from Saints Row, Thor’s hammer, or even the latest collection of cyber-ware and weapons from the most hyped games. Similarly, one visual enhancing Grand Theft Auto 5 Ped Damage Overhaul V 1.1 Mod can bring the missing colors of beautiful sunsets and gloomy evenings the game is missing. You can finally enjoy a true Los Angeles experience thanks to plenty of visual enhancing mods the community has come up with. So when are you going to cruise down the streets of Los Santos enjoying the breathtaking views in the latest Cybertruck?