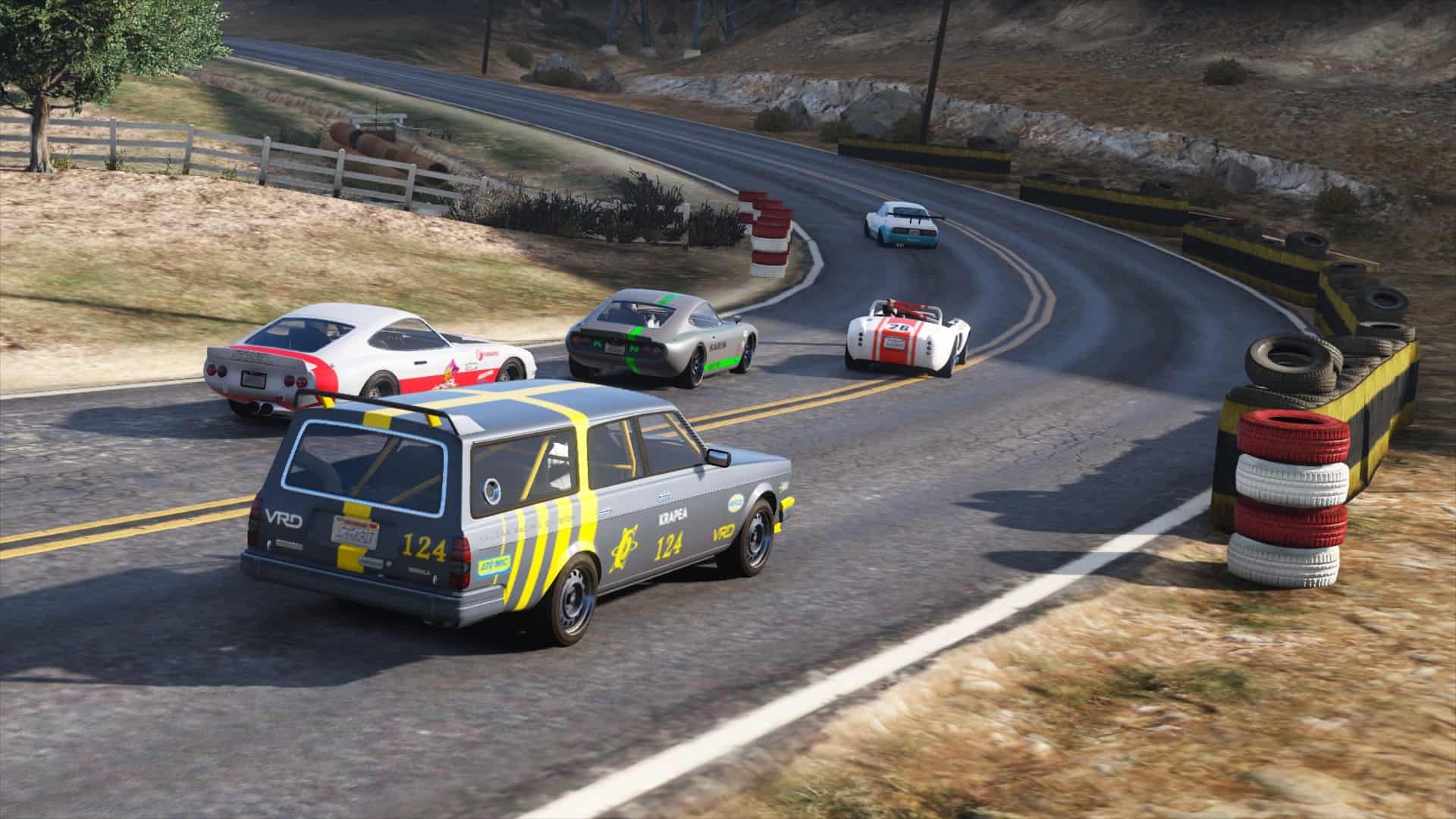 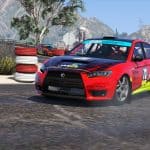 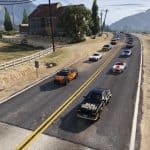 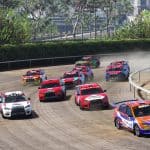 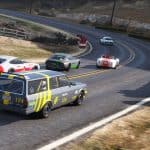 0.6.9.5 > 0.7
– Added an alternative Anti-Overshoot system. AI will project their path ahead and figure out if they’ll end up on the grass or not, and lift, even brake, according to that. Its added to Developer Settings.ini > RACERs, enabled there.
– Reworked LookAhead so AI approaches corners turning in earlier, while trying to stay on the inside mid-corner.
– Tweaked side to side avoidance so AI won’t jerk the steering so easily. Less back and forth, but more strict steering if needed. Two and three-wides are a bit common as AI is able to hold better.
– Increased wheelspin tolerance so AI corrects more smoothly. Earlier, they’d lifted the throttle too much for little wheelspin issues.
– While in the grid waiting for launch, lowered idle throttle input from 75% to 25%, so the AI doesn’t need to correct throttle so quickly.

Planned for 0.7.5
– Configurable hotkeys to open the ARS menu.

ARS its a racing tool that allows singleplayer racing against smart opponents in a modded enviroment. Hope you have fun with it! I sure have.

Route-based tracks
ARS makes use of routes instead of waypoints to build its tracks. This has huge advantages – The tracks’ limits are very well defined and curves are well detailed. AI benefits greatly from this as they tap into the route info to try and follow the track to the best of their abilities, meaning they don’t need vanilla pathfinding anymore, and they’re able to make full use of the track’s width, encouraging multiple-car battles and overtaking behavior. Add-on lands are possible to race on thanks to this.

The track only contains the route, all information AI needs to navigate and race is generated from the route points, and that’s huge, as it allows to create tracks just by painting lines on the ground. AI figures out the rest.

Modding support
ARS is built to support a wide range of game modifications out of the box. Specifically:
Add-on vehicles: All kinds of land based vehicles are supported. Add-on included, there’s no difference between vanilla and Add-on ingame. In fact, ARS comes with a few IVPack and VWE vehicles added in.
Handling mods: ARS’ AI taps into the car’s Handling to judge the vehicle’s capabilities, like tire grip and engine power, for example. This allows the racers to work with almost any kind of handling, from the arcadey vanilla to realistic builds like Killatomate’s Realistic Driving.
New lands: It is possible to race in add-on lands of any kind. This is because the routes themselves provide the AI with everything they need to navigate, so there is no pathfinding needed at all.
Stunt tracks: Tracks can be built on GTAO’s stunt props (any prop, really), thus allowing Cunning Stunts’ style races to be done too.
Surfaces/Material mods: A few mods modify the ingame surfaces to have better physics, and this is specifically supported aswell. AI will account for the new grip modifiers.

Content Creation
ARS has an in-game route creator with prop placement support. It also allows players to create their own vehicle builds, tied to specific disciplines.
Both kinds of creations are stored in .xml format and can be easily shared between games!

Proper AI
The opponents feature a scratch-made AI specifically coded for this script. GTAV’s AI is disabled for the races!
Among other things, AI is able to take any kind of corner, overtake each other, make full use of the track’s width and respect personal spaces to a great degree. They are also context aware in a fair share of situations. For example, they know to give way or hold their ground regarding side-to-side battles, and can actively look for a gap to overtake.

Discipline system
Basically a glorified tagging system, it lets you define which kind of cars should show up to your races. The disciplines are custom and stored in each car’s xml file.

ARS comes with a few basic disciplines like ‘sponsor’ for sponsored vehicles (livery) and ‘drag’ for dragsters. Cars’ classes count as a discipline too, along their modelname and vehiclename.

INSTALLATION
All the required files are stored within the ARS folder. Drop the folder itself on ‘GTAV Root/Scripts/’. It will look like \Grand Theft Auto V\Scripts\ARS\(Content).

Ingame, you can simply hold Shift and press E, and the main menu will appear.

SETTINGS
You should open Options.ini and DevSettings.ini inside ARS’s folder to configure the script to your liking. All the options in there are explained in the files.

Changelog
– 0.6.9.5
– Fixed a missing variable that made AI brake later than they should.
– Fixed in Developer Settings.ini: ‘AITuningLevel’ was set to 2 by default. Changed to 0
– Reworked sliding and spinout counteractions so the behavior adjusts to each vehicle (handling) instead of using absolute values.

– 0.6.5
– Fixed permanent BUSTED/PURCHASED messages.
– Added a few options to the .ini settings
– – TimeOut, seconds to end the race after the first racer finished
– – AllowDuplicates, allow the script to fill the grid with duplicates if there aren’t enough unique vehicles
– Added a ‘discipline’ tag , “nearby”, allows nearby cars to be picked up for the race. Else, nearby vehicles will be ignored. This functionality was already in ARS, but you had no way to control or disable it.

No new vehicles and no new tracks.

– 0.6.0.1
Added a preemptive fix for the NULL exception. Should prevent crashes on pre Arena War builds.
– 0.6.0.0b
Changed the default DevSettings.ini config so the log doesn’t freeze the game trying to learn about the +500 vehicle builds at start.

THE INCOMPLETE PACKAGE
Sadly, you can notice this is not an 1.0 release. ARS is not complete and it is not the full experience. I have ran out of time and have not been able to complete this script before my deadline, and I have to move on. As of now, ARS is barebones and only the AI, editor and race behavior are there.

The reason for this is that scripting the route system and AI have been a titanic effort, and it has taken me more than a year to figure out and manage. So I am absolutely burned out and I have also spent the time I allocated for this project completely. Its releasing late, by the way. Should have been done by July.

ARS lacks:
– A complete set of vehicles to race against (Only a few dozen are included)
– Multi-race championships
– Any kind of progression
– Immersion focused features
– A proper interaction menu
– General polishment and intuitive design
– ARS’ AI is also unable to handle ambient traffic for now, so traffic is fully disabled while you’re racing. Hopefully, this becomes an option in the future.

I will attempt to work on ARS in the future and update it as I am able. It is not a certainty, though.

Grand Theft Auto 5 is a great game and mods make it even better. The game is still relevant and one of the best games playable right now due to its unmatched physics and open-world experience. Even though GTA Online is there, most people prefer to enjoy the mysteries and the experience in the singleplayer mode. However, it can also get a bit repetitive. GTA 5 Mods help you overcome the boringness to add more content into the game and customize it according to your will. Grand Theft Auto 5 Mods bring various enjoyable elements into the game like new game modes, vehicles, weapons, and characters. The modding community has made mods diverse and you can choose from thousands of mods to fit into the game. For instance, a GTA 5 Autosport Racing System (ARS) 0.7c Mod can bring your dream vehicle into the game, letting you enjoy it even more. One by one, you can customize the entire collection of GTA 5 vehicles giving it a more lifelike experience with real cars from real manufacturers. Gun mods can bring you the feel and combat experiences of other games, allowing you to wield a lightsaber from Star Wars, the famous dubstep gun from Saints Row, Thor’s hammer, or even the latest collection of cyber-ware and weapons from the most hyped games. Similarly, one visual enhancing Grand Theft Auto 5 Autosport Racing System (ARS) 0.7c Mod can bring the missing colors of beautiful sunsets and gloomy evenings the game is missing. You can finally enjoy a true Los Angeles experience thanks to plenty of visual enhancing mods the community has come up with. So when are you going to cruise down the streets of Los Santos enjoying the breathtaking views in the latest Cybertruck?